Some underdog gems last round with the Cowboys and Titans getting up.

Pretty good round overall, which still threw up some exciting upsets to keep the season interesting.

A few questions to ask now…..Are the Panthers coming, and are the Storm vulnerable? What about the Raiders?…Let’s look for some answers.

Here is our preview of the NRL Round 11.

Get full access to the members only tips for the NRL, AFL and all the other sports and racing that we cover.

The reigning premiers haven’t exactly been lighting the world on fire, only just finding a way to get past battlers Wests and the injury-ravaged Dragons.

North QLD could get JT back for this one. Even without him, they have plenty of firepower back in Lachlan Coote and Jake Granville, and another upset in Sydney looks to be on the cards.

After last week I swore off the Warriors, but it didn’t last long.

They have some big issues clearly, but reality is they were very good for ‘most’ of the game against the Panthers. At home they should have a rocket lit under them.

The Dragons still miss Widdop and Dugan, and now Aitken goes out. This will test them.

The Dragons are the surprise packet this season, and will not be beaten easily. If the Warriors have any pride at all, they should get the job done here.

Brisbane’s defence has proven to be a wall this season and Wests have often offered little in attack.

The Tigers lose Moses and the drama that came with him, so it might not be the worst thing for them. Woods returning is a big plus.

The Broncos get Hunt and Roberts back, and this spells trouble for the Tigers.

Rain expected to dump down on Brisbane to the extent of 25 mm sweetens this deal even further. All the points to come from Brisbane, little from Wests.

The Titans are showing the fight that got them in the finals last year, and with some stability slowly coming back they should continue their charge here.

The loss of Trbojevic really hurts the Sea Eagles, and a second game in QLD in two weeks looms as a daunting task.

This should be a good game, but confidence is a big thing.

What a difference a week makes.

The Eels were on a winning streak with confidence sky high, then last week got absolutely dismantled by the Roosters. Norman out for this clash really doesn’t help matters at all.

The Raiders were knocked off by a young Knights team in a game almost everyone had locked in. Let’s not take too much away from the Knights though.

Still, the question is while the Raiders get back to their 2016 form?…If so then they win this. In fact, I think they do anyway.

These two met not too long ago and it ended in a deadset flogging by the Panthers.

Not sure it gets to that here, but the plucky Knights might find it tough against a resurgent Panthers.

Yes, the Panthers were all but gone against the Warriors. Not just the game but their season too. Getting off the canvas like that can install belief, and if they can’t use it to beat the Knights then that’s it.

Knights will show some guts as always, but in the end a solid Panthers win looks about right.

I wasn’t one to jump on the Dogs bandwagon after their string of wins. I remained unconvinced, and last week showed why.

The Dogs remain without Reynolds, but their issues are a little deeper than that.

The Roosters will be hot off their flogging of the Eels, and it is hard to see them dropping this.

A good old fashioned rivalry will bring it closer, but the Chooks look too good in too many places.

The Bunnies head back to their spiritual home ground (?) this week, taking on the Storm in Perth.

While the east coast is expecting a barrage of rain, WA is also getting a deluge, but by kick off should present great conditions for rugby league.

We have a Bunnies side not known for defence and a Storm side capable of piling on tries, but also surrendering them.

It is hard to see the Storm losing two straight, and no doubt defense will be a focus after a less than impressive game last week.

Get full access to the members only tips for the NRL, AFL and all the other sports and racing that we cover. 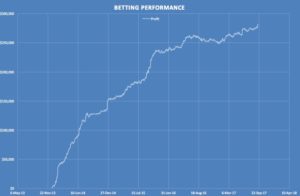